Allah (Glorified be He, the Exalted) says:

The Hajj (pilgrimage) is (in) the well-known (lunar year) months (i.e. the 10th month, the 11th month and the first ten days of the 12th month of the Islamic calendar, i.e. two months and ten days). So, whosoever intends to perform Hajj therein (by assuming Ihraam), then he should not have sexual relations (with his wife), nor commit sin, nor dispute unjustly during the Hajj. And whatever good you do, (be sure) Allah knows it.

Verily, the first House (of worship) appointed for mankind was that at Bakkah (Makkah), full of blessing, and a guidance for Al-'Alameen (the mankind and jinns). In it are manifest signs (for example), the Maqaam (place) of Ibraheem; whosoever enters it, he attains security. And Hajj (pilgrimage to Makkah) to the House (Ka’bah) is a duty that mankind owes to Allah, those who can afford the expenses (for one’s conveyance, provision and residence); and whoever disbelieves [i.e. denies Hajj (pilgrimage to Makkah), then he is a disbeliever of Allah], then Allah stands not in need of any of the 'Alameen (mankind and jinns).    (Surah Aal-Imraan: Chapter 3: Verses 96,97)

Hajj, one of the five pillars of Islam, is the Muslim pilgrimage to Makkah that takes place every year in the month of Zul-Hijjah.  All Muslims who are physically and financially able to make the pilgrimage are required to do so at least once in their lifetime. In just a few days, Muslims of every ethnic group, colour, social status, and culture will join in solidarity in the world’s largest annual gathering of people following the footstep of Prophet Muhammed (Sallallahu Alayhi Wasallam) and his companions of their first pilgrimage in Islam that took place in the year 628.

1.     A pillar of Islam: For Muslims, Hajj is the fifth and final pillar of Islam. It is the journey that every adult Muslim must undertake at least once in their lifetime - if they can afford it and are physically able to make the pilgrimage.

2.     Unity of all Muslims: During Hajj millions of Muslims set aside all differences of race, caste, economic status, nationality, and even sect as they unite in the holy pilgrimage, each donning the simple two-piece white garb, allowing nearly no apparent difference whatsoever as they all stand together.

3.     Purpose: During the Hajj the Pilgrims perform acts of worship and they renew their sense of purpose in the world for the hereafter.

4.     Humility: The Hajj makes Muslims feel the real importance of life here on earth, and the afterlife, by stripping away all markers of social status, wealth, and pride.

5.     Tranquillity: During Hajj, Muslims from all parts of the world come together and show their love for one another and get to know one another without any barriers or obstacles between them.

6.     A learning journey: The season of Hajj brings a great deal of good as Muslims come together and learn from each other’s problems and solutions.

A fresh start: Hajj is a chance to wipe clean the slate of one’s mistakes and shortcomings of the past. Prophet Muhammed (Sallallahu Alayhi Wasallam) said: “One who comes to this House for Hajj and avoids all lewdness and sins, he returns as he was on the day his mother gave birth to him.” (Bukhari & Muslim). 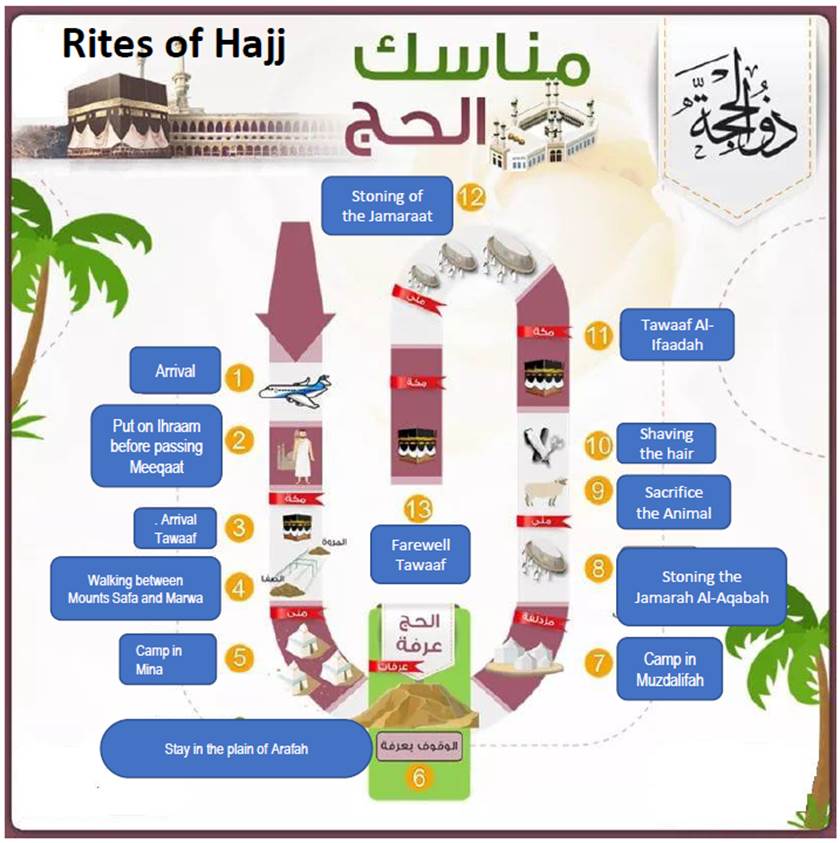 ISLAM IS SUBMISSION TO ALLAH AND RESPONDING TO HIS COMMANDS

“Islam is submission to Allah (Glory be to Him, the Exalted) and responding to His commands.”

The experience of Hajj is full of unpredictability. No matter how much we plan, no matter what agency we use for our Hajj, anything can go wrong very suddenly and very quickly. The chaos and the lack of clear schedule and plans have prompted one German revert to declare that the Journey of Hajj is by itself proof of Divine Existence. He stipulated that there must be a God in existence who would facilitate this whole journey with the inadequate human planning that usually takes place. We believe he is right. Allah’s Will supersede all and His Mercy and Care exceeds everything else. And our response needs to be: ‘O Allah, we submit to Your Will, protect us and guide us to what is best for us in this world and the hereafter’.

The above comment is not a call to suspend all planning for one’s life. Taking initiative is a duty on each one of us. But when we are faced with what is beyond our control, know that we are enveloped in Allah’s Mercy and submit to His Will with humility and reverence.

O Allah! Your Forgiveness is far greater than my sins and I have more hope in Your Mercy than in my own deeds.